For over a year and a half, I have promised myself that I would begin to keep a personal record of all the events Leif and I have put together as an Apartment Life team. And yet, with every passing month, I never did. Not only did I not do it – I didn’t even try. Pretty pathetic. So, please forgive me as these posts are likely to be wildly irregular and terribly unchronological. Nevertheless, I will persist!

For our final outdoor movie event of the summer (not the year, because we’ll still do one more in September!), we decided to show the classic blockbuster, “Jaws”. All summer I had been trying to figure out a way to show a film by the pool instead of just in The Remy’s courtyard lawn. You know, just to spice up the experience a little. There were a few things standing in our way:

1) A lifeguard needed to be on duty, and the pool hours only went until 9 PM.

3) With the shape of the pool courtyard, it would be a little difficult to have the blown-up screen positioned in a way where the projector wouldn’t be 3 feet underwater.

But with some fast thinking during a meeting with property management, I managed to ask for shifted hours for the lifeguard, so she would stay until 11 PM (no added expense as she would come in at 3pm instead of 1pm!). I figured issue 3 would take care of itself with some creativity on the spot. And it did, primarily because Leif is a wizard.

We held the Movie in the Pool event on Friday, August 30th and I had a really fun time with the decor/food.

I first carved out a Watermelon Shark. I only stabbed myself a few times, don’t worry! The whole thing only took about a half-hour to do, with most of the time being dedicated to carving off the thin top layer of rind over the “teeth”. I know the little guy turned out okay because when I was headed down to set up, he scared my neighbor half to death as she opened her door and stepped into the hallway. I was so proud. 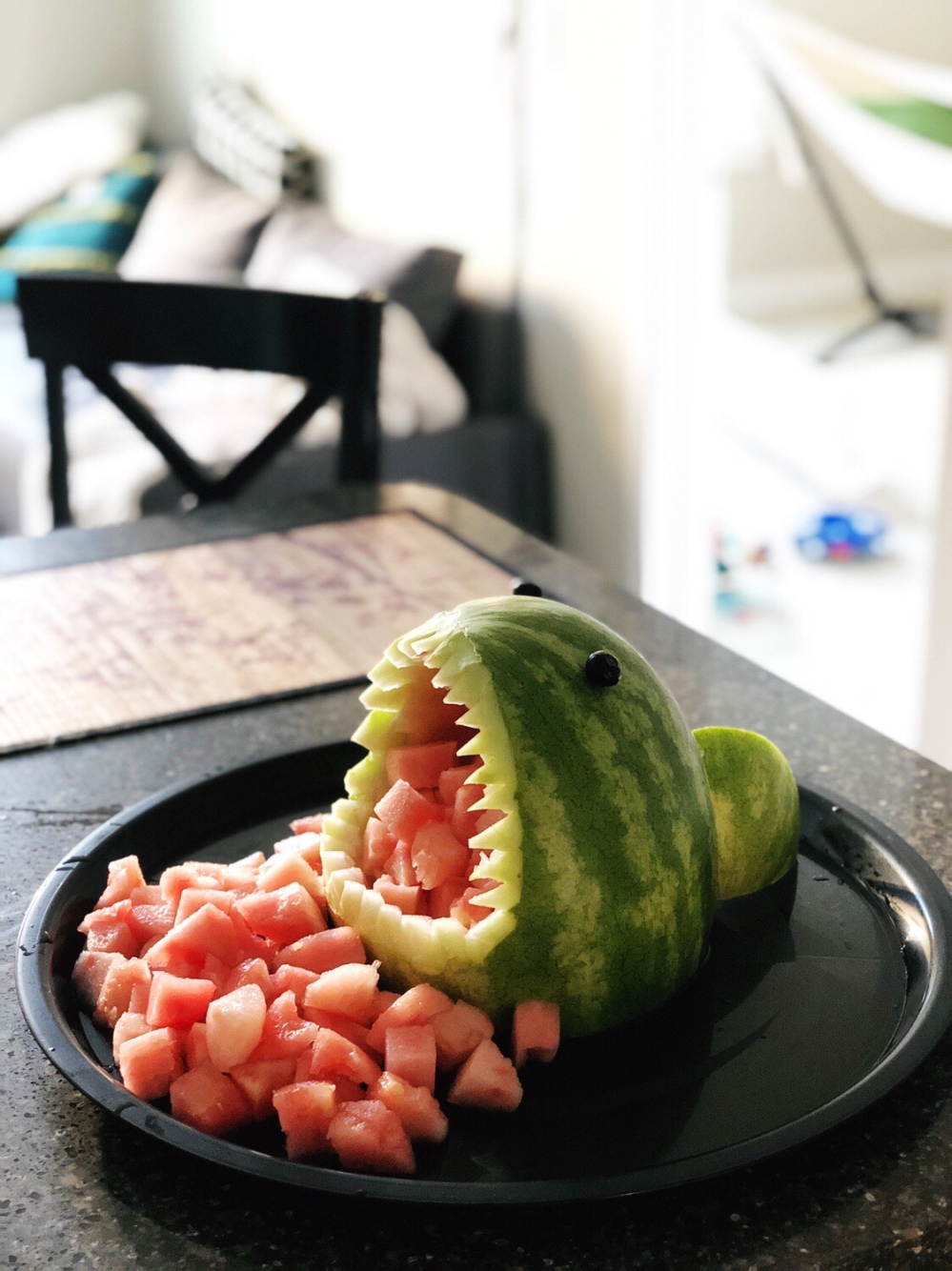 Then we separated out a big carton of goldfish out into small plastic cups (w/ lids) onto a tiered cupcake tray. Ta-da! Shark bait, Oo-ha-ha!! 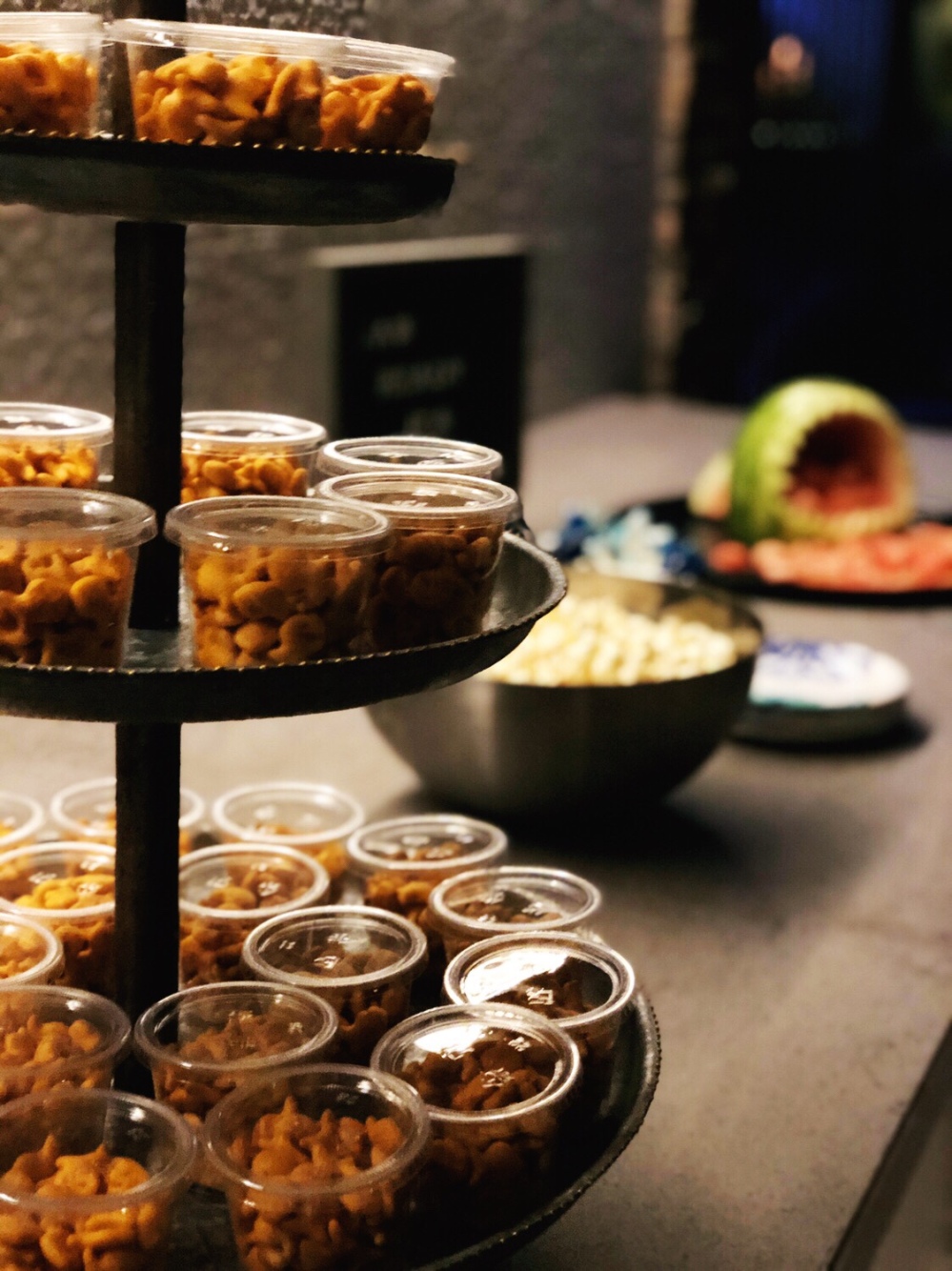 We also purchased shark gummies from Amazon because how could anyone watch Jaws without some? However, they were much larger than anticipated, but people still seemed to enjoy them!

I got a little lazy with the drinks as we threw a bunch of sodas, lemonades, and water into a cooler with ice and called it good.

As people came into the courtyard to claim their seats, and/or their spot in the pool or on a floatie, I hijacked the Spotify playlist of the Jaws soundtrack to include a couple instances of “Baby Shark”, much to Leif’s chagrin and my childlike joy. 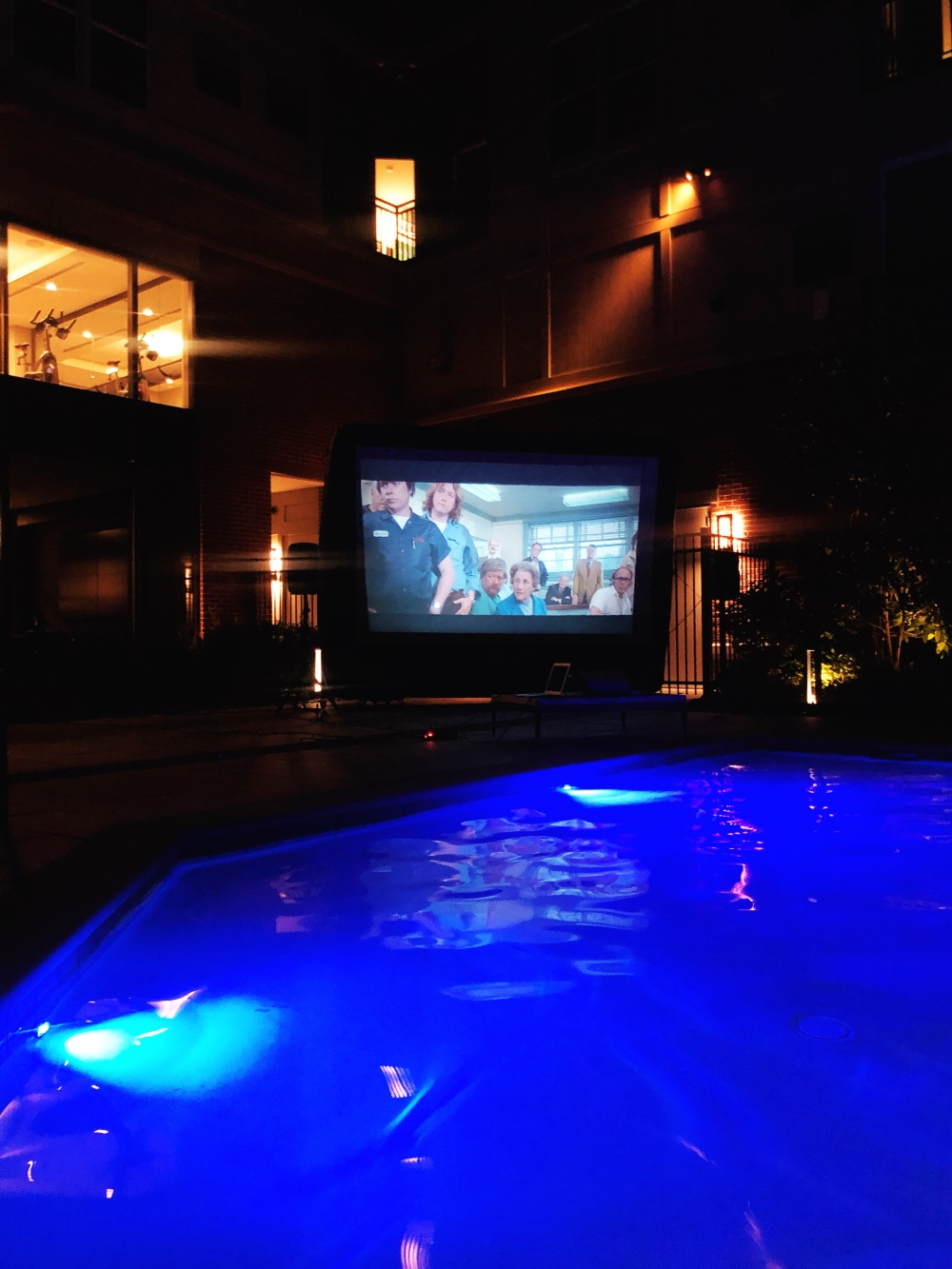 Overall, a lovely event, and honestly, my first time ever watching the entirety of Jaws. I did NOT realize the movie could be rated PG but still have some serious side-boob action, so apologies to The Remy residents on that one. It’s always encouraging (and hilarious) to watch residents come and watch the movie from their balcony as well, so I guess the boob shot didn’t offend too many people.

My favorite moment of the night was when a woman came down who rarely attends our events, grabbed a seat, and said, “I heard the theme music and I knew I HAD to come down. This is my very favorite movie.” Who knew anyone’s favorite movie could be Jaws, but hey, I’m here for it!!

And this final picture was snapped right after I tossed Mr. Shark in the trash. He was so forlorn looking that I couldn’t stop laughing. So I snapped the shot. You’re welcome.